AS IS THE CASE with most of Jan Moravec’s works, it’s tricky to know where to start thinking about Middled. It is perhaps too temptingly obvious to begin with, say, the middle, but there is no middle — nor end, really. There is a beginning (at least the beginning of a beginning), and it happens to be the most surprisingly enjoyable few minutes of the film, wherein we get a glimpse of the main characters’ personalities: an uncertain boy, a cerebral mature girl and a spunky puerile one — the last of which is superbly played by Jennifer Hutchings, a deliberate show-stopper with gleefully arrogant interruptions. To be fair, all three leads are excellent and in fact carry most of the film, but only when Moravec allows them to by actually keeping the camera on them, giving them room to breathe. Hutchings, to her credit, forces herself into the picture like a slap across the cheek. 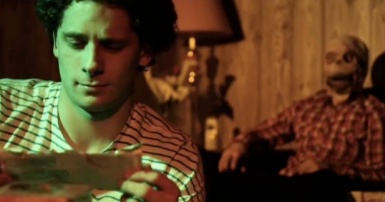 And that’s the biggest problem, really. After the first five or so minutes, the movie holds firm to a bizarrely thumping pace, as the three friends delve deeper into their storytelling circle and reveal what is only implied to be their worst drug experiences. Their stories intertwine and muddle up — what exactly happened that night? Mushrooms? LCD? We never really know; maybe they don’t even know. The whole thing’s a haze, like every weekend party in university, with some sort of music always in the background (expertly composed by Nathaniel Edgar, with the exception of confusing ragtime for howdown) and each character differently dazed, feeling out their stories one by one. 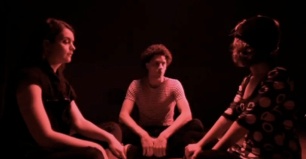 Middled does a good job of playing on party stereotypes: the boredom, the dancing, straining to hear what’s being said, drugs, some sort of music constantly in the background, the guy in the corner doing something in the kitchen, the guy who starts rapping when no one asks, the few who go on ChatRoulette just to see tits. It all works, even in spite of Moravec’s own humourously stilted cameos. In part because of its low budget, Moravec pulls off a pretty realistic atmosphere on film, and it plays well with Andrea Cuda’s seemingly absent-minded cinematography. (It occurs to me that Moravec could have deliberately given her no direction whatsoever; if he did, it kinda worked.)

After a few minutes, Middled loses steam. It cuts repeatedly and quickly to a man by a switchboard, changing the tone and content of each party — he turns up the “Alcohol Abhorrence” and someone cries out “I hate beer!” It’s a fun technique but falls flat by the film’s unfulfilling end. Maybe too true to its form, Middled is all the boredom of a too-long trip without any of the fun of actually being on drugs.

I’ve known Moravec for a few years now and can, without fear of ethical bias, point out that Middled suffers the same structural problems as his past scripts: a promising beginning, bountiful with allusions and foreshadowing, but when the allusions reappear, they aren’t so much explained as repeated. We see a magician early on for seconds at a time, for example, 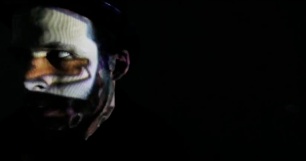 which is just a set-up so we can see the magician again later… only this time, for a few minutes instead of seconds. Things aren’t explained or explored so much as they are bluntly observed. As a writer, Moravec seems afraid to make his point too obvious, as if by cracking his density for the audience he’ll somehow cheapen his art. His style has definitely matured in the eight or nine years I’ve known him, and Middled undoubtedly marks his most technically superb work yet, but his determination to remain textually obtuse and stereotypically “weird” is too distracting from whatever thesis he’s out to prove. Somewhere in Middled lies a decent art film, but it’s buried beneath indulgent editing and a juvenile, maybe even shallow concept of experimental film. In all likelihood, he’ll grow out of it, and hopefully into something real. 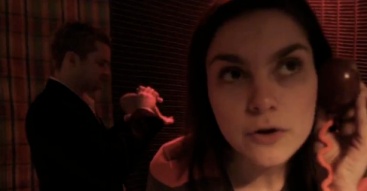