There are no cutesy animal cartoons on the walls or windows, a staple of many meat restaurants. Round-eyed pigs? Adorable! Cows in aprons? ^^ 귀엽다~~~!!! But wide-grinning dogs? None of those, at least at last night’s particular bosintang restaurant near Gaegeum in Busan. Not many pictures at all, really, except for ones of the meat itself, which is a pretty miscellaneously brown sort of thing, rife with fat and surrounded by a dark palette of orange broth, green onions and red peppers. 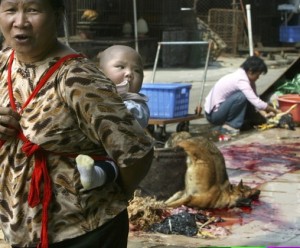 Arguably the product of eating at 6 p.m. in a cozy, off-subway line neighbourhood, but it’s worth noting that there were way more old folks than young ones. I would not be surprised if the younger generation, influenced by the Western world, were pulling away from eating dog meat in much the same way they are pulling away from whale. After all, bosintang literally translates into “invigorating soup”, and is accompanied by one of those old Korean wives’ tales of increased virility. (Something dogs evidently have in common with garlic buds.)

Despite the globs of fat hanging off the reasonably expensive and tender meat itself, the whole experience is distractingly underwhelming. For either 15,000, 30,000 or 50,000 won you can get a decently-sized wooden block of plush marinated dog, including some ribs but mostly miscellaneous bits, called sooyook. Though the fat tears off easily, I was the only one who made any attempt to do so; everyone else rubbed the whole thing around in the gochujang mix (chili pepper paste, ground perilla seeds, sliced ginger and a yet-unidentified-to-me floral herbs), presumably because the frankly lovely combination of flavours is the real treat amidst an otherwise kinda boring dish. The second-course soup, the bosintang itself, was similar, and by this point I’d almost entirely forgotten that I was eating someone’s former best friend. Dunno if it says more about the food or myself, but the best bit to my mind was the bokumbap at the end, which is mostly rice fried in the spices of the small bit of remaining soup. Without meat.

I take credit for neither of the above photographs.