Best Use of Technology – Radiohead
The British Friday night headliners turned their backdrop into a series of high-def TV screens, overlaying images of their faces with their instruments, dissolving into static, racing green lines and other aptly trippy shit. The show itself was solid but a bit dry; I don’t think anyone there could claim that singing along to “Pyramid Song” is a) fun or b) possible.

Worst Use of Technology – The Stone Roses
Don’t get me wrong—the Roses put on one of the best shows all weekend. But the Sunday night headliners’ visual effects looked like they came from the Roses’ own decade (the ‘80s), like that lame collage effect when you divide the screen into four parts of the same video, then eight parts, then 16… A terrific festival closer, but a horrible visual effects team.

Most Likely to be the Glam Rock Resurrection of Kim Jong-il – Beat Burger
Poor Beat Burger—in addition to bearing an awful pseudonym and playing what felt like the same song for an hour at 2:30 a.m., dude looks like the illegitimate child of the late North Korean dictator and David Bowie’s gay side.

Most Ironic Racial Sensitivity – Los Lonely Boys
To their credit, brothers Henry and Jojo Garza (the latter pictured above) were one of the only Western acts to open by yelling out, “Annyeonghaseyo!” Less to their credit, their audience at the time of that statement was about 70 percent white people.

Best Accidental Cameo – Liam Gallagher Drunkenly Stumbling Through the Stone Roses Crowd
The Beady Eyes bandleader and former Oasis guitarist caused a wave of Roses fans to swarm away from the stage and towards his drunken self as he stumbled to his large private black tent while security stood guard, looking visibly unimpressed.

Weirdest Quirk – Shady Crowd Control
A 29-year-old Canadian dude I met made the keen observation that the sun was so blazingly hot that weekend that wherever there was shade, there were people sitting in bizarre shapes, contorting to the shadows cast by the various stages and shuffling forward every five minutes to adjust to the sun’s movement. Hysterically accurate.

Best Dance Party – Glen Check
On the heels of their 2011 debut album, this Korean electro-rock group has some seriously catchy tunes. Listen to this track—or this one—or this one, even, and tell me that these tracks don’t sound like they were written to be hit singles. By the end of each song, everyone was jumping up and down, singing along to nonsense lyrics like “Take back the scene! Your vague recall!”

Biggest Waste of a Headlining Slot – James Blake
Blake’s a talented musician, perhaps best placed in a 4 p.m. slot at a festival for people to sit down and relax to. But giving the man 90 minutes on a party-centric Saturday night? Rather than stay awake while buddy jived out to his ambient lullabies for 20 minutes shorter than his allotted time, I took a nap. This man, passed out around an hour after Blake’s set, represents that snooziness.

Winner of the Joseph Gordon-Levitt Lookalike Contest – Lee Jae-cheol of Monkeyz
With his goofy grin, shaggy hair and lanky frame, the boyishly adorable lead singer of Monkeyz is the spitting image of what GQ’s favorite celebrity would look like were he Korean. Bonus points for Lee’s flailing dance moves, which are presumably what inspired their band name.

Smartest Fashion – Wide-Brim Hats
Most of our necks weren’t so lucky to survive the striking sun, but many of the Koreans seemed prepared with straw farmers’ hats or sombreros (couple outfit above) that looked both practical and hipster-friendly enough to justify. Foreigners in Korea should take note. 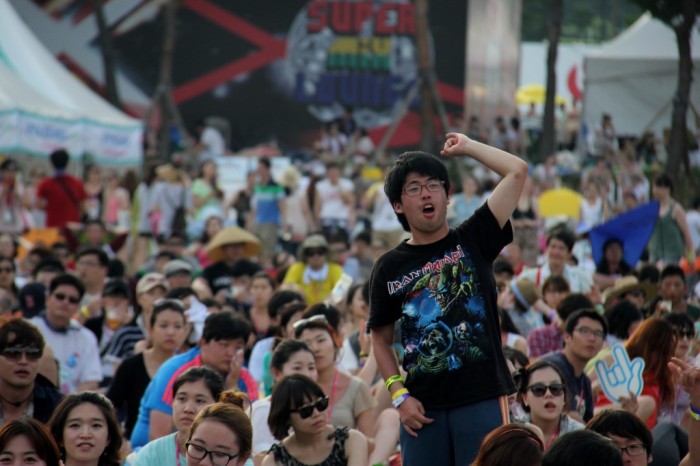 Dude Who Had the Best Time During Motion City Soundtrack – This Guy
Never was there a more sincere thank-you than that of Justin Pierre, the pop-punk group’s lead singer, when he told the audience, “Thank you guys so much. This is so awesome,” to the point that he was giggling uncontrollably. In this journalist’s personal observation, Pierre was mostly referring to the above-photographed fan.

Most Deceptive Use of a Conga Line – The Owl City Moshpit
It started off innocently enough—Koreans jumping in a line, hands on shoulders, dancing to “Fireflies” and whatever other songs Owl City played while we were waiting for “Fireflies”. But follow the conga line and you’d quickly discover it dissolving into a grossly unjustified moshpit occupied by laughing Korean boys shooting water guns. The fuck, dudes—during Owl City?

Lee is a quiet, sweet-voiced singer-guitarist who played the smallest stage on the final afternoon of the festival. During her rendition of “Desperado” by the Eagles, when she sang, “You gotta let somebody love you,” the 30-odd people who were there all simultaneously echoed the line (as per the original song) under their breath, but the moment was so quiet that you could hear everyone doing it. Lee did that very Korean thing girls do when they blush; that is, cover her giggle with her hand.

Most Unfortunate Blacking-Out – This Couple
Around 30 minutes before the Stone Roses, this destroyed couple could be seen near the beer tent closest to the main stage. Dude was so far gone his belly button was being used as a shot glass for a group of nearby bro-types doing shots of goddamn anything. Can’t tell who comes out worse in that situation, although the fact that the above-photographed dude now has a public photograph of him grossly passed out means it’s probably him.