I have a poor memory. Way too often, people ask me if  I’ve seen a movie, and I say, Sure, and they ask, What’d ya think? and I say, truthfully, that I don’t really remember.

So this is less a “One Movie Every Day For a Year” blog or a “100 Days of Cinema” phase, ’cause I could never commit to those. It’s more a Weekly Review of films I watch since I watch a lot of movies these days and don’t want to forget what I think about them, because I think what I think is worth thinking, and also maybe one day I’ll be applying for a position as culture columnist for Slate and want to prove that I know anything about anything. There will very rarely be any relationship between movies in a given week, so don’t look for one. 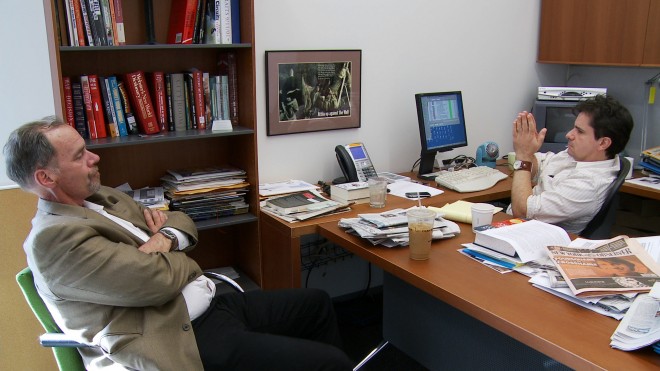 Page One: Inside the New York Times (Andrew Rossi, 2011): There’s a looming masturbatory danger about journalists as subjects of journalism that the media has gotta start being wary of. It’s like movies about movies, or books about books. The audience’s presumption walking in demands that the authors know their subject intimately, and loves it dearly — I mean, it’s their job — and it doesn’t work as often as it does. Page One never runs out of ideas before the end of its 90 minutes, but it doesn’t make any of them particularly engaging, either. It’s as if they read the hundreds of hard news stories published every week about the decline of newspapers and just simply compiled them, rather than dissecting them, turning dry facts into a part of the global conversation.

Tabloid (Errol Morris, 2010): I ought to disclaim this by saying that Errol Morris is one of my Top Three favourite documentarians, and Gates of Heaven is one of my Top Three favourite documentaries. So it is with willing and delightful indulgence that I watched Tabloid,  as much a triumph of storytellers as of storytelling. It’s a shame that Joyce McKinney, a former Miss Wyoming who evolved into a self-perpetuating media sensation because of her audacious and wildly self-assured personality, later sued Morris for misrepresenting her in the film — seeing as it’s her telling her own words telling her own story throughout. The movie shines brightest in juxtaposing her fairy tale version with the reality recalled by hardened, arguably scummy journalists. There’s no real good guy or gal here, but watching the story unfold is a thrilling ride nonetheless.

I Confess (Alfred Hitchcock, 1953): A lesser-known Hitchcock, starring a stone-faced and chisel-jawed Montgomery Clift (he does it better than Cary Grant, I think) as a priest falsely suspected of murder. Clift discovers within the first five minutes who the real killer is (he confesses in church, somewhat abruptly, immediately after doing the deed), and for the subsequent 85 minutes finds his morality tested and interrogated while police compile evidence against him. It’s probably one of Hitchcock’s breezier pictures, since the central dilemma — that is, whether to go against God and reveal the true murderer, or maintain the strength of one’s word but fall on the sword — doesn’t change much from those first few notes. The backstory that unfolds between Clift and romantic lead Anne Baxter is kind of fun but not nearly as compelling as the actors themselves.

Searching for Sugar Man (Malik Bendjelloul, 2012): A brilliant and frankly unbelievable debut documentary from South African Malik Bendjelluol. It opens on a few grizzly, white, near-middle-aged South African dudes in the music industry describing this magical musician: often wore sunglasses, only made two albums, goes by the surname “Rodriguez”, became one of the most influential singers in South Africa. That’s basically it. The next 90 minutes describe their search to discover this man’s identity. Top-notch storytelling, gorgeous African landscape shots and a suitably modest Bob Dylan-esque acoustic soundtrack (all Rodriguez himself), interspersed with just enough South African apartheid history for relevant social context and viewer education, firmly earn this one a spot somewhere in my Top 10 Documentaries of All Time list.

Away We Go (Sam Mendes, 2009): Away We Go suffers from being too easily persuaded by other films. What’s that, you say? A light acoustic soundtrack? All-caps intro title cards? Disenchanted young adults who’ve woken up to find themselves cluelessly fully-adult in their 30s? None of it seems particularly original, and despite decent acting jobs by Krasinski and Rudolph (their chemistry is decent enough, and Krasinski’s scruffy-faced deadpan hits a lot of the jokes dead-on), Dave Eggers‘s script feels, predictably, more like actors reading a mildly absurd novella than a movie script. It works in the monologues, but the plot turns are predictable and the jokes even more so.

Shutter Island (Martin Scorsese, 2010): I can’t tell if the second episode in the third season of Workaholics ruined this ending for me, or if it was just obvious from the get-go, but Shutter Island felt like a long drawing-out of a predictable shaggy dog ending. It is in many ways deliberately directed — Hitchcockian angles, seemingly dated greenscreening, mysterious shots that make you do a double-take — and the ending, to its credit, made me pause the whole thing, say “Wait, what?” and recall every suspicious moment in the movie to make sure it all added up. I disagree with DiCaprio’s detractors in claiming he over-acted the role; in fact, despite the flick’s Hitchcockian influences, it calls for none of Alfred’s archetypal “blank stare” leading man qualities (see I Confess, above), but rather an almost cartoonish representation to sing in tune with the rest of the movie’s frankly silly moments. It all sorta gelled, and the movie’s final moments are ambiguous enough to warrant a post-film conversation, which is all I really ask for, anyway.