As an ESL elementary teacher, my job is pretty much to sift out good resources from bad ones, as if a lobster fisherman casting off into a sea of shit. But for whatever reason, children’s entertainment is a goddamn breeding ground for terrifying nightmarish voices and awful animations. Here are the most petrifyingly off-putting ESL resources available to the public eye, should you ever want to convince anyone from a non-English speaking country to never learn our language:

#5 Video “Time to be Happy” from NuBeats

I don’t think NuBeat Videos could have found creepier children, nor posed them in creepier tableaus.  But what actually itches me most about this is how subtly Christian it is — most of what NuBeat does is explicitly ESL through religion, which is fine for what it’s worth, but this one hides its message under the guise of a time-telling ESL song. (And its message of “Be a good person”, for that matter, itself hides the semi-secret addendum of, “…specifically to get into Heaven.”) It gets especially unsettling at the 1.04 mark, when NuBeats uses the best in 1980s technology to swiftly transform its children into angels.

If you search for “ESL kids stories”, Rong-Chang will inevitably come up. Moving past the fact that it seems coded entirely in HTML circa 1994, the year of its creation, the resources themselves are totally useless: since none of the stories are categorized, finding a past tense story, for example, is a crapshoot. Sometimes you get shit like this, which seems borderline educational at best (and downright psychopathic at worst), whereas his “ESL Beginners” section is rife with 50-word stories that I could have written myself. Rong-Chang is the brainchild of Ron Chang, PhD, yet such a name avoids the question in everyone’s mind: What happened to the g?

La cucaracha literally means “the cockroach”, and has been revised time and again as a revolutionary people’s war song throughout Mexican history. Here’s the translation EBS settled on:

When the soldiers go on marching

Through the valleys and our hometowns

Children all come out to greet them

With happy smiles and laughter

I guess it was good ol’ times

I remember all their faces 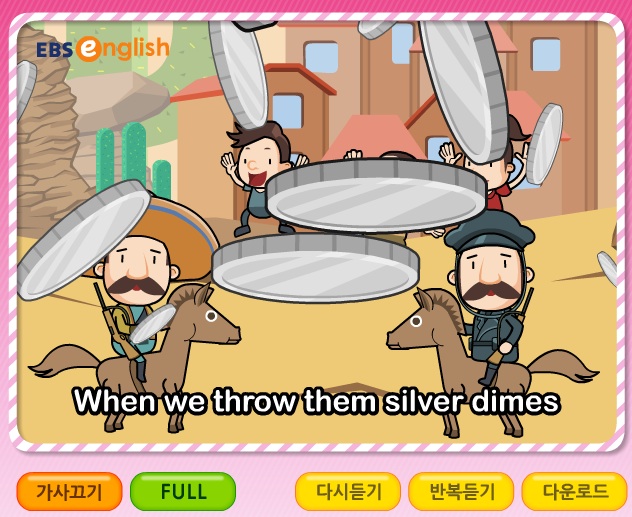 It must be emphasized that the rhyme scheme here is literally nonexistent. Also strongly recommended via EBS’s portion of Jr. Naver’s site is this song about hyperactive chipmunks and a bizarre rendition of “The Ugly Duckling”, which features a whiny self-professed dumb kid who lets bugs in when he leaves the window open and then paints over his dad’s car, but insists you should forgive him because he loves you and does not know any better. And then, of course, the chorus:

that’s how the story goes

I know someday when I grow up

I’ll be quite the gentleman

(Note that during those last two lines he’s wearing a square university cap and holding a diploma. That is not, in fact, “how the story goes.”)

To be fair to the GiggleBellies, these psychedelic nightmares are not actually geared towards ESL students. Rather, I think the screeching Kafkaesque demons aim to terrorize young Western children’s minds — nevertheless, I made a pledge many moons ago that those creatures would never, ever come near any child I had any part in raising. Although I suppose the upshot would be that, if my hypothetical kid did grow up with the GiggleBellies, he’d certainly never feel the need to take LSD.

If there were more to this video than just a terrifying voice I might be compelled to not cry every time I see it. Oh well. I never much cared for sleep, anyway. YouTube user DavidOsaka may be the ESL world’s Ed Wood, with some of the highest ratios of dislikes : likes of any YouTube ESL videos I’ve seen, and manages to be completely tone-deaf as well as a complete failure at making cute kids seem cute. How he does it, or why he posts it, the world may never know.